The lake was opened to the sea at 11.15am on Saturday June 29th with the swell easing. On Sunday June 30th ECan reported that the cut had developed well and was approximately 60m wide. The water level dropped at Taumutu from 1.81msl to 1.76msl and the level should now keep dropping. Work will continue as required to keep it open.

The cut normally takes 1 – 3 days to develop fully (scour/widen) and once fully established it is likely to be 1 – 5 days before the effects of the dropping lake level are noticeable around the full extent of the lake margin.

The lake was open for short periods on each day from Tuesday 25th to Friday 28th June but closed again each time due to high tides and large swells.

The lake level reading at Taumutu on June 27th was 1.80msl.

With a successful opening established, staff and machinery will remain on site until the lake level has dropped below 1.13msl, the minimum opening level for this time of year.

ECan are posting updates daily which can be accessed from the alert banner at the top of their website page.

The lake closed overnight on June 26th/27th as a result of the heavy sea swells, with around 70m of shingle being forced into the channel. Unfortunately the surf zone was too dangerous for staff to work in on the morning of June 27th, and the sea conditions meant any opening attempt would be unsuccessful. Staff remained on site and began work as soon as it was safe.

ECan have released further information with background on the current situation, which is available from their website.

The lake was reopened to the sea around 9.30am on Wednesday June 26th.  There was a 3m swell and an approaching southerly and it subsequently closed overnight.

The lake was opened for the first time since the recent heavy rainfall at around 11.30am on Tuesday June 25th. Unfortunately the opening did not survive the high tide in the evening and closed around 5.30pm, with about 80m of shingle washing into the cut and blocking it.

ECan issued a release outlining what was happening over this period, which is available on their website.

Following the exceptional weather in June, the lake level was read manually at Taumutu on Monday June 24th and the level was 1.74msl. It was not possible to get a reading at Nutt’s Cut where the other lake level readings are usually taken.

The average  level of the lake as recorded on Thursday June 13th was 1.05m. The minimum level at which an opening can be considered at this time of the year is 1.13m.

Environment Canterbury provided the following information for those who live near the lake:

Environment Canterbury have provided some information about about commonly asked questions:

Q: When was the lake last opened?

Q: When will the lake next be opened?

A: Between 1 April to 31 July the minimum level the lake may be opened is 1.13m. The amended Water Conservation Order for the lake does allow an opening at any level between 1 April to 15 June but our current resource consent does not permit this. A new resource consent, that will be jointly held with Te Runanga o Ngai Tahu, is currently being prepared and will include the ability for this ‘any level’ opening. A Protocol Group made up of different organisations try to reach consensus on when to open, or not open, the lake. If consensus is not reached then the final decision is made jointly by Ngai Tahu and ECan.

Lake level information is now also available on the ECan website and will be updated weekly.

The graph below is a summary of  lake level for 2012 to mid December. 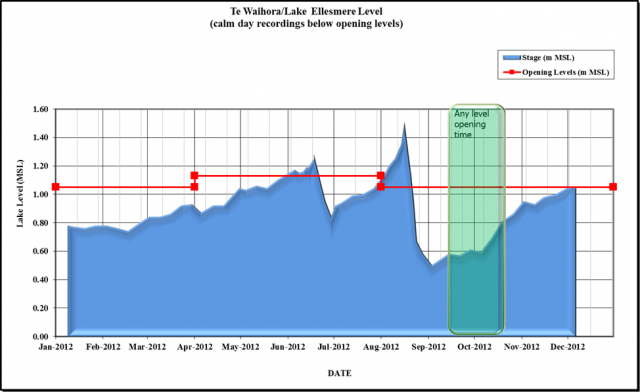