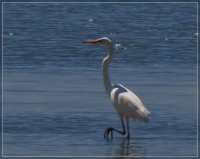 February 9th 2013 saw several organisations coming together to undertake a count of all wetland birds present on the Lake. The coordinated bird count was an initiative of a group of agencies involved in management and was spearheaded by WET Trustee Ken Hughey, Professor of Environmental Management at Lincoln University, and experienced bird watcher. The census was conducted according to a monitoring protocol agreed by a number of agencies.

Over 55,000 birds, including several rare visitors and endangered native species, were counted on the day – the results can be seen here. The table shows the birds recorded on the day. A note will also be made of some of the more unusual species which were recorded by reliable sources a few days either side of the census day but not recorded on that day.

The results will be freely available and it is hoped that this information, which will allow us to see what the long term trends are for bird species at Te Waihora, can be related to management actions.

The Ornithological Society of NZ (OSNZ) regularly undertake surveys of waders but this year, for the first time, a large number of other organisations joined OSNZ to count all the wetland birds, including the ducks and geese, on the lake in what will become an annual event. Volunteers and staff from Waihora Ellesmere Trust (WET), Department of Conservation, Environment Canterbury, Christchurch City Council, Ngai Tahu, Lincoln University and Selwyn District Council joined experienced birdwatchers from OSNZ for the count on February 9th.

Nearly 40 people took part – they were divided into eight teams, each with an experienced team leader who was familiar with the lake. Each team took one or two sections of the lake margin and recorded the birdlife. Less experienced counters assisted with counting the wildfowl and recording the results.

The day was great fun although it proved a very long day for some teams as the the start was slightly delayed due to fog. Other challenges included several hunters and a low flying plane disturbing groups of birds and making the counting harder. There are a few photos on our Facebook page.

Preliminary analysis of some of the wader species numbers is showing a worrying decline in numbers for some species but significant increases for others.  Ken Hughey presented a brief report to the February WET Trust meeting, and also the February OSNZ meeting, identifying some trends and outlining some areas for further work. See his PowerPoint presentation here.

The sections, or management areas, have been used for many years and were first set out in a report for the NZ Wildlife Service in 1985 – Lake Ellesmere, A Wildlife Habitat of International Importance by Colin O’Donnell.  You can download the report here (11MB).

If you’re keen to get out and have a look for some of the amazing species found at the lake, here’s a table showing which months are best for seeing some key species. The month of May is not recommended as it is start of the duck shooting season.