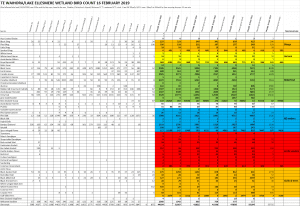 On February 16, 2019 over 50 volunteers and staff from a number of agencies undertook the annual census of wetland birds around Te Waihora / Lake Ellesmere. Early morning rain cleared to an overcast and windy day.

This year over 44,034 birds were recorded around the lake – the  results table can be viewed here. This total number of birds are down from last year. However, it is similar to 2017, 2016.

The table shows the birds counted in 2019 and for comparison, in columns to the right, the corresponding totals from 2013 – 2018.

The birds are grouped into Shags, Herons, Waterfowl, NZ Waders, Arctic Waders, and Gulls & Terns. The graph below shows the proportion of each grouping.

Notable observations this year is that NZ Waders made up over 25% of the birds counted; a marked increase from other years. This can be attributed to a large increase in pied stilt numbers – double the average of the previous six years. In contrast water fowl numbers where down; grey teal numbers dropped by two-thirds from 2018, shoveler, black swan and Canada goose numbers where also down.

For the gulls and terns: black backed gull numbers have decreased. Black billed gulls are showing a declining trend which mirrors what is happening to their populations in other areas.