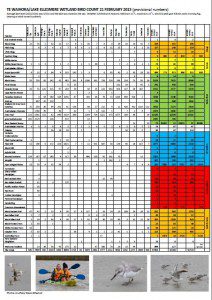 On February 21, 2015 almost 50 volunteers and staff from several organisations undertook a count of all the wetland birds present at the Lake.

This year almost 48,000 birds were recorded around the lake – the  results can be viewed here. The table shows the birds counted this year, and then in columns to the right, the corresponding totals from 2013 and 2014.

The birds are grouped into Shags, Herons, Waterfowl, NZ Waders, Arctic Waders, and Gulls & Terns. The total number of each group of bird species is highlighted in a different colour.

The Christchurch City Council Rangers took on the lake shore which falls within Christchurch City. They covered the area in 4 teams and counted around half the birds. The lake shore in the Selwyn District was covered by 9 teams. Each team included experienced OSNZ birders, supported by  staff and volunteers from the Department of Conservation, Environment Canterbury and Waihora Ellesmere Trust.

Selwyn team members met in the morning for a briefing at Springston South Soldiers Memorial Hall, and returned there later in the day with their numbers, and to catch up with the other teams. Things were slightly slow to begin with as there were patches of fog around the lake. Fortunately this lifted and didn’t significantly delay counting.

The count is a snapshot of the birds present on a specific day and, for the species which occur in large numbers such as the ducks and geese, the numbers are estimated by experienced counters. The total number of birds recorded is slightly over 13% down on last year, with just under 48,000 compared with around 55,000 in 2014.

The bird numbers this year are within the parameters of what we’d expect in a dry year.  Numbers are affected by the habitat conditions and feeding opportunities.  The low lake level we have had over summer will suit some species but others, including some of the ducks, geese and swans, respond by moving to other areas in the wider lowland Canterbury region where there is more food available.